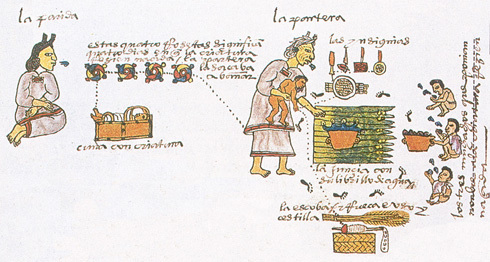 image from the Codex Mendoza (produced ca. 1535-1550)
﻿Receiving the news of pregnancy in one’s family was a joyous occasion. Like most people, the Aztecs loved their children very much. Every child born into the Aztec community was celebrated with a banquet. Midwives were very important to Aztec women; they were involved in the pregnancy from the very beginning. The midwife advised the expectant mother to eat good meals, avoid shocks to prevent miscarriage, and to keep out of the heat. As the due date approached the mother was given some medicine for the pain. At the moment of birth the midwife let out a cry to honor the mother and to greet the new baby.﻿

The midwife than would perform four rituals about four days after the birth. The baby was placed in a pottery vessel full of water. The first ritual she invoked the goddess of water and then put drops of water on the baby’s mouth, telling it to receive the water it needs to live upon the earth. For the second ritual she touched the baby’s chest with her wet hand and invoked the purifying property of water that cleans the heart.  The third ritual she casts drops of water on the baby’s head, telling the baby to let the water enter its body to dwell there. As for the last ritual the midwife washes the baby’s body to keep evil away from it. Following the ceremony, the baby was given a name, often one based on the day and time of birth.

Boys born into the Aztec culture were perceived at birth as warriors. They would get two symbols of being a warrior. An arrow would be placed in his right hand and in his left a shield was placed. Aztecs would have a short ceremony following the birth of the little boy. Afterwards an older warrior would take the boys arrow, shield, and his umbilical cord and go bury it in the battlefield. This would symbolize the rise of a new warrior. Every boy would have his own unique arrow and shield designed especially for him to resemble his family and the gods. These birth rituals show how important warrior culture is to the Aztec people.

Female children born into the Aztec Culture were given domestic objects instead of warrior objects. They would receive a broom, a reed basket, and a spindle. The girl was not presented to the sky because the sky is a masculine god.


(From the Codex Florentino)